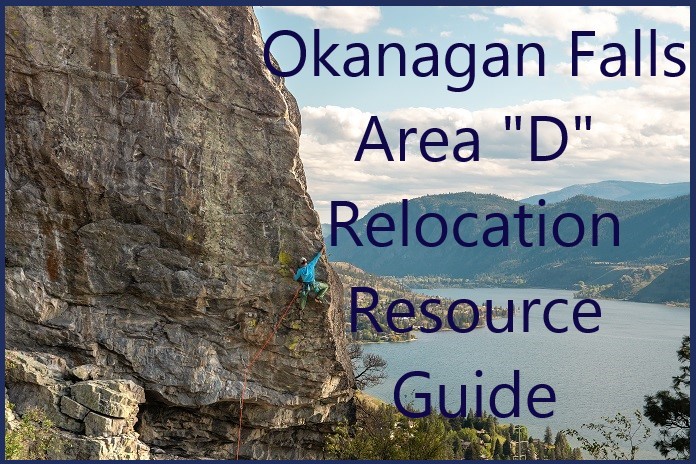 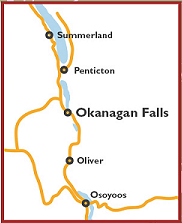 Our region's history is filled with stories of heroism and resilience. The cast of characters includes cowboys, adventurers and eccentrics. Some of the more popular stories, legends and myths are included below. Throughout our town and neighbouring communities, you will find publications by local authors sharing more of our colourful history.

Located on the southern end of Skaha Lake in the Okanagan Valley, and known locally as OK Falls, the little community of Okanagan Falls was originally known as Dogtown, from the Okanagan Nations word Skaha (meaning dog), after which the nearby Skaha Lake was named.

The actual Okanagan Falls were reduced to gentle rapids many years ago with the construction of the flood control dam in the 1950s to control the level of water flowing south in the Okanagan River.

Credit to Travel British Columbia for this story. www.travel-british-columbia.com

The little grey Bassett House, which today houses the Museum, was ordered from the T. Eaton and Company catalogue in 1909 by the pioneer Bassett family, who operated a freight and stagecoach company in the area. Arriving in prefabricated form at Okanagan Lake by rail, the house crossed the lake on a sternwheeler and was carried the rest of the way to Okanagan Falls by horse-drawn wagon.

Credit to Travel British Columbia for this story. www.travel-british-columbia.com

Kenny McLean was born May 17, 1939 in Penticton and resided in Okanagan Falls. He started breaking colts for his dad when he was just 12 years old and went on to rodeo competitions at the age of 17. He won 14 Canadian Championships and in 1962 was the World Saddle Bronc Champion. He was inducted into the Canadian Rodeo Cowboy Hall of Fame and is the only rodeo cowboy to be inducted in the BC Sports Hall of Fame.

Kenny McLean is also the only cowboy to receive the Order of Canada, Canada's' highest honour. During his life he sponsored and ran rodeo schools, particularly for the young, training many future champions. Many champions chose to return time after time to improve their skills at the sport. He encouraged young competitor's right up until he passed away on July 13, 2002.

Credit to the Okanagan Archive Trust Society for this story.

United Church (a.k.a. ‘The Blasted Church’)

In 1929, a small crew from Okanagan Falls set off to a deserted mining camp some 16 miles away from home to dismantle an old wooden church and bring it back to Okanagan Falls. The plan called for a controlled blast of four dynamite sticks inside the church in order to "loosen the nails". Odd as it may seem, the explosion spared the wood from damage during dismantling. Save for losing the steeple, the plan succeeded. Now, the 108 year old wooden church stands proudly in its second home of Okanagan Falls.

Credit to Blasted Church Vineyards for this story. www.blastedchurch.com

The history of skiing on Apex Mountain dates back to the 1940s when intrepid downhillers trekked in for winter camping and skiing holidays. A group of Penticton residents set about developing an easily accessible ski hill in the late 1950s and the decision was made to clear the runs on an adjacent shoulder, Beaconsfield Mountain.

A single-lane road was pushed through to what is now the core village and Apex Alpine officially opened on December 10, 1961 with a poma lift.

The poma is long gone. Over the decades lift capacity has steadily increased with each successive generation augmenting or replacing earlier facilities and alleviating congestion as traffic increased. Currently the mountain is serviced by a high-speed quad, triple chair and T-bar. A Magic Carpet has been added for beginners and tubers.

Facilities at Apex include an aerial site and a mogul site of such high calibre that the Canadian Freestyle Ski Association has named it the national training centre for aerial competitors. Apex has hosted FIS Freestyle World Cup Competitions, NORAM Super G and Mars Cup Downhill and Super G races.

The village centre and surrounding residential streets have a unified feel. Inns, lodges, condos, townhouses, vacation homes and chalets mostly stick to a western-style with cedar siding stained in a variety of colours.

Credit to Apex Mountain Resort for this story. www.apexresort.com

The Twin Lake Area consists of two small lakes joined by a stream. The upper lake is called Horn Lake and the lower lake is called Twin Lake. The lakes originated from large outwash kettles resulting from pre-ice drainage basins. Because of the high groundwater absorption of the upper watershed, there are significant fluctuations in surface water levels of Twin Lake during wet and dry weather cycles. The land around Twin Lake used to support a dude ranch and beef cattle. Twin Lakes is now a destination for fishing enthusiasts.

Credit to BC Lake Stewardship and Monitoring Program for this story

Okanagan Falls is an extremely significant location for the local Okanagan First Nation Bands. For many centuries, the Salmon Chief was selected by band members at a gathering that occurred on an annual basis near the waterfalls in Okanagan Falls. The gathering was an occasion of trading, renewing friendships and preparing the winter harvest of salmon caught in Okanagan River at the falls. He was not necessarily a chief but was a respected member of the community tasked to ensure all members and bands had sufficient salmon to last the winter.

Located in the traditional territory of the Osoyoos Indian Band, Okanagan Falls is continuing to build closer ties with this band and Chief Clarence Louie. In August 2011, Chief Louie and the area director at the time, Bill Schwarz unveiled a Salmon Chief statue by Smoker Marchand of the Colville Okanagan Nation Band in the USA, on the waterfront in Okanagan Falls. This gesture of goodwill and friendship between the Osoyoos Indian band and the people of Area D is an important step in the process of developing trust and cooperation between the community and the band.